Your Sick and Self-Serving Vendetta

Your Sick and Self-Serving Vendetta is the eighth episode of the fourth season and the seventy-second overall of the drama television series, Dynasty on The CW. It aired on June 25, 2021.

COLLATERAL DAMAGE - As Fallon continues to work on expanding Fallon Unlimited, she crosses paths with an old college friend, who is more than what he seems. Sam throws himself into his work to occupy his time. Culhane and Jeff support each other until they realize they both want the same thing. Dominique and Blake secretly scheme together. Fallon and Liam work together with surprising results.

As Blake is filling Fallon in on the latest when it comes to Fallon Unlimited across the pond, they find out that their appeal to have the original land permits was denied. Apparently, the Scotland Heritage Foundation filed their claim when the sale went through. They believe the rocks on site is evidence of old castle ruins. Fallon reads over the paperwork and discovers that one of the co-sponsors is someone she went to school with. Thus, she decides that she’ll get Blake to see that this is all a giant misunderstanding.

Sam and Kirby are meeting for brunch and Sam apologizes for Ryan’s absence. He’s busy, but Kirby understands. The one benefit to him being busy, though, is Sam has more time to focus on the hotel. He has a meeting with potential partners to expand the hotel. In the meantime, Fletcher shows up and Sam looks less than thrilled but nonetheless acts in a professional manner.

Culhane and Jeff are catching up on what happened while Jeff was away. Culhane wants to mull things over with Mia and Jeff says he’s on a similar mission since he’s done neglecting important relationships.

Meanwhile back at La Mirage, Blake and Dominique are meeting once again as part of their master plan to trick and take down Alexis. She believes there are diamonds under the manor, so she’ll use any amount of money to make sure they are uncovered. Blake hands over a mysterious bag that he says contains an offer she can’t refuse. Dominique peeks inside of it and says she wants to up the stakes.

As Cristal is waiting for the results of a pregnancy test when she gets a text from Blake who says he can’t make lunch. The results come through and according to the test, she is indeed not pregnant.

Fallon is at Collin’s workplace to get down to business. She wants him to convince them it’s all a misunderstanding but he could care less about the castle. He wants what she stole from him, the land. When they went to Warton together Fallon had him expelled so she could finish first in the class, so this is his way of getting back at her.

At Carrington Manor, Alexis is down below wondering where the crew is that should be mining the diamonds. Dominique rushes in claiming that Blake filed a lawsuit demanding half of the mineral rights.

Jeff is at Mia’s workplace apologizing and admitting his wrongs. Just then Culhane interrupts with a gift for Mia. Jeff and Culhane are clearly confused as to what it happening, but she sends Jeff on his way. Culhane on the other hand, sticks around to help.

Back at the hotel, Sam asks Fletcher to stay behind so they can discuss the “elephant in the hotel.” Fletcher says he and his husband finalized their divorce and he took the job to be closer to Sam. They had a once in a life time love affair and it seems he doesn’t want to let it slip away again.

Collin drops by Fallon Unlimited when he finds out construction on his properties was halted because of code violations. He sinks his offer to 20 percent, and informs her that the hearing moved back so she has time to prepare. She won’t be able to do business with anyone, however.

Sam and Kirby are having breakfast at the manor. He tells her all about the Fletcher situation. He did let him in on the fact he is seeing someone, Ryan. Sam feels like he’s making Ryan his priority but he doesn’t feel the same in return.

Fallon has done an all nighter and Blake isn’t that impressed. He still believes they need to sell, more so now that he knows Collin is an heir to a very powerful media conglomerate. Fallon says he’d never give in if it was his company, but Blake says it’s just about cutting losses at this point.

Dominique is busy supergluing the door frame when Alexis and Adam make their way through the manor. She quickly shuts the door behind her as the two come into the room. Adam wants to propose to Kirby but Alexis thinks that’s a bad idea, but Adam wasn’t asking for her permission. He wants a diamond and thought it would be a nice way to include his mom.

Culhane and Jeff smooth things over and Culhane agrees to step aside, neither of them want a girl to get in the middle of their friendship. Culhane looks a little heartbroken, but he wants to be a good friend.

Later, Fallon agrees to sell the land to Collin for the original agreed upon price. She hands him a bottle as a showing of good faith and as he leaves the room to get the papers drafted, she takes a sneaky photo of his desk.

Culhane meets with Mia who has decided to open his gift to her without him. It’s an art print of “One City, One Voice” that was his fathers and he thought she’d want it. It’s also why he wants to help her out with the event.

Dominique and Blake are at the manor and aren’t sure where to go next because Alexis wont budge. However, Dominique thinks she has the perfect plan, and takes a sledgehammer to the floor to destroy it.

Fallon and Liam are cross checking Collin’s list with his calendar schedule. They find a match and prepare to stake out and find out what he’s really up to.

Cristal is at the doctor who says she really might be pregnant after all, they’re going to need to run blood tests to be sure. Cristal looks concerned. At the manor, Alexis discovers the “foundation crumbling” (thanks Dominique and Blake), Adam says she’s the captain of the ship so she can handle it and Alexis snaps back with a not for long.

Meanwhile, Fallon and Liam are in full stake out mode. As it turns out, he’s not meeting with the state attorney general at all. Instead, he’s meeting with his secretary. Liam snaps a few blackmail photos so they don’t miss their opportunity.

Culhane offers to close up shop for Mia who instead challenges him to a little round of golf. She asks for his help and makes a move on him, which he returns. Alexis gives Blake the manor back, not without her conditions all of which he agrees to.

Sam wakes up to a bunch of missed calls from Ryan, but he’s currently pre-occupied with Fletcher, who is in the bed next to him.

Collin has everything ready for Fallon to sign who instead throws one last thing at the wall to hope it sticks. She conceded, and the land is now a designated land mark. However, as long as she agrees to restoration and leaves a 500 foot radius around the campus, she can build whatever she wants.

Culhane brings Mia a coffee and says he doesn’t want to hurt Jeff so he wants to know if he should be the one to tell him or if she should. However, Mia has no intention on choosing, she wants to date both of them. Culhane is clearly taken aback.

Blake is back at the manor. Dominique trades in her half of the manor for the loft, she wants to convert it to a space to honor her mother and her fashion dreams. Blake agrees. Alexis comes strolling in and Blake can’t help but laugh. He tells her that not only did she trade the manor, there are no diamonds on the property, so she’s walking away with nothing.

Adam is officially the new chief of staff at the hospital. Cristal is there, upset, and he asks what happened. She tells him she thought she was pregnant, but after a few tests it came back that she has a growth pressing on a nerve. She has a brain tumor. Adam looks like he’s at a loss for words.

Alexis is heated when she finds Dominique in the mines. They begin to fight and eventually find themselves stuck inside when the rocks come crashing down on them.

Fallon: Next time, get him to buy you a soda and popcorn first.

Dominique: Partners? You're as delusional as you are desperate.

Sam: It's time to turn my love life lemon into work-life limoncello.

Blake (to Alexis): You know, I would say that payback is a bitch, but that title is reserved exclusively for you.

Alexis: I hope you reach your point quicker than you got down the hall.

Anders: Or Allow us to finish our game in peace.
Alexis (throws her purse on the board): There. The game is now in pieces.

Alexis: I have a proposition.
Anders: Oh, been there, done that.

Fallon (to Liam): When Colin sees these photos, he is gonna drop the suit faster than he dropped his pants tonight.

Doctor Flanney: You might be shocked to know that a $9.99 test isn't always accurate.
Cristal: Would it matter that I splurged on the $19.99 brand? 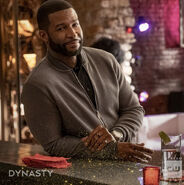 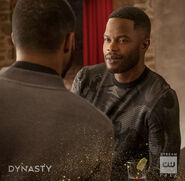 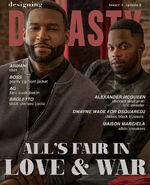