You Vicious, Miserable Liar is the twentieth episode of the fourth season and the eighty fourth episode overall of the drama television series, Dynasty on The CW. It aired on September 24th, 2021.

RUNNING AWAY - Fallon, Sam and Kirby take a trip to Los Angeles in the hopes of settling the unsettling, resulting in some very bad ideas. Adam presents his research to the board, who is impressed, but there is more in store for him. Meanwhile, Jeff remains annoyed that Dominique is nowhere to be found and exhibits disturbing behavior. Culhane tries to fix Blake's mess and is surprised by the results. Cristal has a heart-to-heart with Amanda. 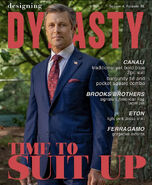