You Make Being a Priest Sound Like Something Bad

You Make Being a Priest Sound Like Something Bad is the eighteenth episode of the third season and the sixty-second episode overall of the drama television series, Dynasty on The CW. It aired on April 17, 2020.

KEEPING SECRETS - Blake gets closer to finalizing an important deal while Cristal's big charity event approaches. Fallon searches out the perfect wedding gift for Liam, and Sam gets a lesson in friendship from Colby.[2]

Fallon tries to secure Liam's favorite singing duo, Kelly and Donna, to sing at their wedding. Kirby is still mad at Sam, but her sexual relationship with Adam has resumed. Adam's supervisor, Dr. Bailey, threatens to have him fired for stealing drugs for Jeff, but intimates that she might forget about it if he stops rejecting her advances. Cristal feels guilty about kissing Caleb. Blake buys her a diamond necklace that, according to Fallon, means Blake has done something bad, and Cristal soon figures out that he slept with Laura. Jeff and Sam bond, and Jeff realizes that his marriage to Alexis only made sense when he thought he was dying. Blake misses Cristal's hospital gala to deal with a crisis involving Carrington Atlantic oil tankers in Moldavia. Kirby coerces Cristal into getting Adam out of trouble by threatening to reveal the secret that Cristal kissed Caleb. Fallon embarrasses herself trying to impress Kelly and Donna, but steps in to sing with Donna when Kelly falls ill. Caleb comes to Cristal's rescue, and they have sex. Michael asks Fallon to help him get back at Dominique and Vanessa. Adam tells Cristal that Blake and Anders have been kidnapped in Moldavia.[3]

Sam [to Jeff]: That's the nice part about being married. You have a plus-one built right in.

Cristal: Maybe it's the Catholic in me, but how can one kiss make me feel so guilty?
Father Collins: Because we both know that it felt like more.

Culhane: Only you can completely humiliate yourself and still end up winning the night.
Fallon: Well, like any skill, it only gets stronger the more you practice.

Culhane: There's only one name that comes to mind when I think of revenge.
Fallon: Fallon? Awww. I'm flattered.

Cristal [to Fallon]: Besides I am Carrington, can't show up in sweats. 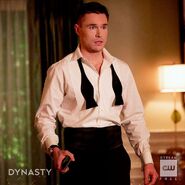 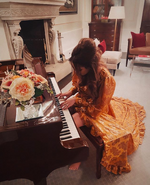 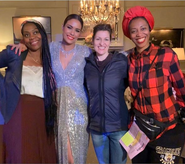 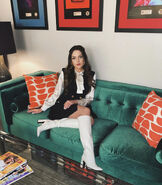