Use or Be Used

Use or Be Used is the nineteenth episode of the first season of the drama television series, Dynasty on The CW. It aired on April 20, 2018.

Cristal convinces Blake to go public with the truth about the scandal, but he later destroys her files on the coverup and uses a recording of her admitting guilt to keep her in line. Fallon agrees to a date with Liam. She sends Sam to try and sell back her shares in ColbyCo to Jeff, who refuses. Alexis, distrusting Liam, tries to get between him and Fallon. Steven goes on a secret trip to El Paso to track down Adam. At a fashion show, a drunken Jeff confronts Fallon before passing out. Alexis reveals to Fallon that Liam is really a journalist named Jack Lowden writing a tell-all, and Fallon cuts him loose. Sam negotiates a deal with Jeff to sell the shares, and Alexis burns Liam's manuscript—actually about his own family—before visiting Jeff.[2]

Cristal: I'm not angry Blake. I'm scared. Scared of you.
Blake: Well, you should be.

(at breakfast)
Alexis: Could you pass the orange juice, Celia?
Sam: Rude.
Alexis: Oh, sorry. Cristal. A little birdie told me that you used to go by Celia. I see why you changed it. It sounds like that disease when people pretend they can't eat bread. 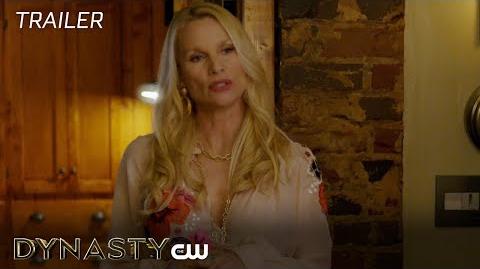 Dynasty Use or Be Used Trailer The CW