watch 01:47
Wiki Targeted (Entertainment)
Do you like this video?
Play Sound

The Caviar, I Trust, Is Not Burned is the ninth episode of the third season and the fifty-third episode overall of the television series, Dynasty on The CW. It aired on January 17, 2020.

THE TRUTH HURTS – Blake’s trial continues as Alexis shocks the jury with her testimony. Following the scuffle between Adam and Liam, Fallon returns to the courthouse to find her mother has returned, newly married to her ex-fiancee, Jeff Colby.[2]

Adam saves Liam from falling but then falls himself, though he escapes with minor injuries. Alexis testifies that she saw Blake murder Mack. Fallon visits Jeff and Alexis ostensibly to reconnect with her mother, but actually to find her datebook to prove she was not home when she said she was. While Cristal helps Blake have a juror replaced, Fallon is able to prove that Alexis is lying, resulting in a mistrial. Dominique is especially upset over Jeff's marriage, and confronts Alexis. Later, Dominique takes a public tumble down the courthouse stairs and makes it look like Alexis pushed her. Sam reconnects with Fletcher. Adam tries to make things up to Blake for torching the vineyard, but Blake tells him to leave the Manor. Adam moves into Alexis's vacated loft. Fallon tricks Cristal into revealing that Blake did kill Mack. Alexis reaffirms her commitment to help Jeff destroy Blake.<ref>This page uses Creative Commons Licensed content from Wikipedia (view authors).

Fallon: It’s not everyday that your mother marries your cousin. Except maybe in Nebraska.

Cristal: If Alexis is involved, I’m guessing it has to do with money.
Alexis: That is the gold digger calling the cattle black.

Fallon: In the meantime, we'll be sure to send the police over to arrest you for attempted murder with a deadly weapon.
Liam: It was a flower pot, Fallon.
Fallon: Yeah, but a deadly one.

Alexis: It's burnt. This champagne was obviously frozen in the bottle at some point.
Dominique: I know. That's why you're drinking that one.

Dynasty Season 3 Episode 9 The Caviar, I Trust, Is Not Burned Scene The CW
Add a photo to this gallery 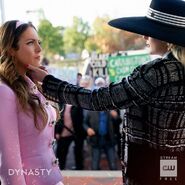 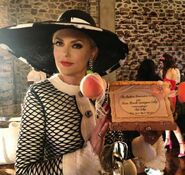