The British Are Coming

The British Are Coming is the sixteenth episode of the fourth season and the eightieth episode overall of the drama television series, Dynasty on The CW. It aired on August 27, 2021 to 0.42 million viewers.

GRANT SHOW MAKES HIS DIRECTORIAL DEBUT; NENE LEAKES GUEST STARS - Blake makes a life changing announcement, in more than one way. Fallon calls on Nene Leakes to help stir the pot of competition in the online shopping world. Alexis attempts to make amends with Fallon and Adam, yet they are both suspicious of her motives. Sam and Culhane have very different ways of processing recent events. A new arrival to Atlanta raises many questions.[1]

Fallon (to Blake): I would maybe lose the, uh, "called to duty" part.

Fallon (to Dominique): Break a leg.. on your way there.

Alexis : I find it hysterical he thinks he can win. He's got more skeletons in his closet than a Halloween Outlet Store.
Fallon: Doesn't everybody in this family?

Fallon (to Liam): I guess I'll have to treat her like I would any other member of my family. I'll derail her deal, and then with nowhere to go, she'll come running to me and i'll able to get her at a bargain-basement price.... What? That's the way my family treats each other.

Adam: So you had Fallon trick me into coming here by asking me to pay a house call to a sick friend?
Alexis: Yes. Crab Roll?

Dominique (to Fallon): I appreciate your offer, but I don't dwell on my failures. I pounce on opportunity. So I'll be closing a deal with a very well known retailer in the next 48 hours. Oh, and since you clearly admire my designs, you should order soon, because I'll be selling out. Sorry, no family discounts.

Adam: I've been thinking about our relationship, and as much as I hate to admit it, the thought of you dying while there's discord between us is troubling.
Alexis: It is troubling. Why am I the one who has to die in this scenario.

Blake: Honey, maybe you should be more aggressive.
Cristal (on the phone): Hey! Get out of the way, jackass!
Blake: Okay, it sounds like you've got that covered.

Fallon (to Adam and Amanda): Have you tried to sleep with her yet? He will. He likes that sort of thing.

Dominique: Oh, I think I see a loose thread. 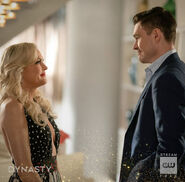