The Aftermath is the third episode of the fourth season and the sixty-seventh episode overall of the drama television series, Dynasty on The CW. It aired on May 21, 2021.[2]

OLD TRICKS - Fallon and Liam prepare for their next step, but as unforeseen obstacles get in the way, Fallon gets creative. Meanwhile, Jeff and Alexis seem to reach an agreement, but Jeff is still suspicious and turns to Culhane for help. Lastly, Cristal makes a surprising decision.

Kirby is being rolled into the OR after being stabbed by Evan Tate. Adam tries to follow but Anders stops him in his tracks and tells him he’s going nowhere near Kirby. Sam tries to reason with him by reminding Anders that Fallon said Evan is the one who hurt her, not Adam. Adam insists on helping because he is a surgeon after all, and Anders reluctantly agrees.

Meanwhile, Blake is also being rolled in another ambulance with Fallon and Liam by his side. He lets her know he tried his best to stop Evan from hurting her, but she wants to hear none of it at the moment. She just wants her dad to be okay. Unfortunately, he mentions to his daughter that he can't feel his legs.

Elsewhere, Alexis tells Jeff about the two incidents, the information being relayed from Adam. Jeff says he hopes Kirby is alright but wouldn’t mind if Blake was the one knocking on death’s door. Alexis has come to pick up a few of her things from Jeff’s place and lets him know she will be sending movers to get the rest. He’s set to meet with the divorce lawyers to get everything settled.

Back at the hospital, everyone is waiting to hear if Kirby and Blake are okay. Adam turns the corner and tells the group that they will both be okay. Blake has temporary paralysis, but he’ll be able to walk again with the right physical therapy. Kirby on the other hand is in lots of pain, but she hasn’t sustained any serious injuries.

At the Carrington Manor, Dominique is awaiting Alexis’ arrival. They’re discussing their plan for the dig under the manor. Alexis says she’s holding a small press event for the ground breaking, but Dominique quickly shuts her down saying she still controls the mineral rights and can have the whole thing canceled with a snap of her fingers.

Fallon has shown up to the manor and she’s brought Blake with her. She wants him to stay in the manor while she nurses him back to health in his recovery. Alexis inquires about a time frame, and Fallon says the two of them will be there for as long as it takes. Alexis reluctantly agrees in order to make peace with Fallon for ruining her wedding.

Fallon brings Blake coffee and breakfast, and Blake wonders if they should hire an actual nurse. He also asks about Cristal and if anyone has heard from her. He desperately wants their marriage to work, so he asks Fallon if she will go to La Mirage to speak to her. Fallon says she’s sure Cristal will come to her senses soon, but she doesn't want to get in the middle of it.

Speaking of Cristal, her and Caleb have woken up after their late night rendezvous, but Caleb says as much as he likes seeing her again, he’s breaking his oath to God. However, he lets her know that if what is going on between them is real,he will leave the church for her.

While Fallon is preparing breakfast, Liam asks if she’s sure a nurse doesn’t need to be hired. Of course, the more she is told no, the more she wants to prove her capabilities, but she soon realizes how much work really goes into caring for Blake Carrington. Liam insists on taking Fallon to lunch, but Kirby and Anders interrupt so now she feels she must also take care of her.

Later, Jeff shows up to the manor and asks Alexis about the profits being split three ways. Alexis makes up an incredible lie so as not to make him suspect his own mother is involved. Jeff isn’t having it and makes dinner plans for Alexis, Jeff, and “Bob Morell” to discuss the ordeal.

Sam visits Blake and gives him a complimentary suite at La Mirage whenever he may need it. Blake asks Sam if he’d be willing to talk to Cristal for him and get her to visit him at the manor. Sam says he will try his best.

Downstairs in the office, Alexis is trying to cram as much information into the actor she has hired to play “Bob.” It’s not going over well, and Dominique wonders why she told the lie in the first place.

Fallon assisting Blake and Kirby continues until they’ve both had enough and “fire” her for some real care instead. On the bright side, Fallon has finally agreed to go on her planned honeymoon with Liam.

At the business dinner, Jeff is grilling “Bob” on his life growing up with Alexis. It’s going better than expected, especially when he declines Jeff’s offer to buy out his share of the mineral rights.

Cristal and Caleb are also at dinner, apparently celebrating Cristal finally telling Blake she’s leaving him. Unfortunately, Alexis walks past the two undetected and sees the two of them together.

As Fallon gets ready to step out of the manor, she gets spooked and decides otherwise. Anders finally corners Adam about Shelly and his mother. Anders begins pushing Adam until he finally gets what he needs in a recorded confession. As Culhane is leaving the manor, Jeff shows up and finds out that Carrington Atlantix has never had a season ticket holder by the name of Bob Morrell.

Alexis interrupts Blake to tell him all about Cristal and Caleb’s dinner. Upon hearing this, Blake looks extremely upset. As Fallon and Liam are supposed to be getting ready for their honeymoon, she reveals they have other plans, as she’s turned the backyard into their own private oasis.

The backyard honeymoon is sourly interrupted by Alexis’ ground breaking ceremony. That isn’t the only interruption, though, because Jeff has come to rain on Alexis’ parade. He knows that “Bob” isn’t actually her cousin and even found out his real identity. He wants her to tell him who the third partner is. Suddenly, Dominique steps up and claims it’s her. Jeff tells Alexis he can’t trust her anymore and pulls his money out of the company.

Blake asks Fallon to get him his favorite Cuban cigars, but she says she can’t leave the manor. This spirals into her confronting her feelings, and she quickly goes off to find Liam. Before she does, she tells him to fight for Cristal because the Blake she knows would never give up so easily.

Anders apologizes to both Kirby and Adam, saying he won’t go to the police with any information he has. However, as he exits the room, he makes the decision to keep his voice recording of Adam.

Cristal has shown up to the manor, seemingly to tell him about her leaving him. Blake, however, has other plans. After seeing his condition and his recovery process, Cristal offers to help him with his physical therapy, but this doesn’t mean she’s moving back in or that they are back together. When Cristal leaves the room, his “nurse” comes back in and he hands her an envelope. As it turns out, he’s hired someone to pretend to be his nurse who is bad at her job, so Cristal would agree to help.

Later,Dominique and Alexis are carrying out a toast. Jeff walks in and immediately argues with Alexis for not signing the divorce papers. He knows she just wanted more money and then goes after Dominique for choosing sides. Jeff says that neither of them are getting any of his money, and Alexis claims it’s going to get ugly. Jeff claims that as long as they’re still married, he owns half of the manor and he plans on moving in until everything is settled. 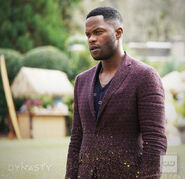 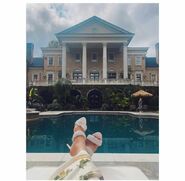