Stars Make You Smile is the seventeenth episode of the fourth season and the eighty first episode overall of the drama television series, Dynasty on The CW. It aired on September 3, 2021.

SUSPICIOUS MINDS - Fallon remains hyper-focused on Fallon Unlimited, but realizes she needs some time with Liam. Kirby returns to the Manor and begins to make amends with those she hurt, with help from Sam. Culhane and Jeff form a new partnership. The recent turn of events causes Blake to become curious about new developments and asks Adam for help. Alexis warns Amanda about Blake.[1]

Amanda: I can form my own opinions, thanks.

Alexis: You don't know what you're talking about.

Kirby: Can we talk?

Adam: I don't think this is the time or the place. 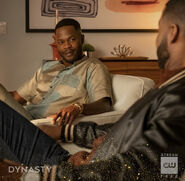 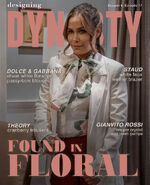