Promises You Can't Keep is the twelfth episode of the first season of the drama television series, Dynasty on The CW. It aired on January 31, 2018.

THE STAKES ARE HIGH FOR THE CARRINGTON FAMILY— When the Carringtons host a lavish Casino Night party, Cristal and Blake's marriage is put to the test when an explosive secret from Blake's past surfaces. Meanwhile, Fallon must reconsider her behavior as she attempts to fix a professional blunder by accepting an indecent proposal.

As the Carringtons prepare for a Casino Night fundraiser they are throwing for Senator Paul Daniels, Cristal learns from a journalist friend, Rick Morales, that Blake regularly bribed Daniels when he was a judge. To avoid the truth coming out, she gives Rick an alternative story about Daniels' many extramarital affairs. When the price of an important Morell Corp. property lease doubles, Fallon has the opportunity to retain her old price if she can win a poker game. Knowing she would be expected to sleep with the owner if she lost, Fallon bluffs for the win. Monica is horrified when Jeff reveals his plan to destroy Blake by using Fallon, but later agrees to help him.[2]

Monica: Does this girl have some kind of hypnotic yoni or something?

Monica: I'll admit she's as flawed as they come but making her pay for her father's mistakes? That just means you and Blake are cut from the same cloth.
Jeff: I am nothing like Blake Carrington.
Monica: No. If you go through with this, you might be worse.

Fallon (To Cristal): Just because you technically saved my life doesn't mean we've had some sort of breakthrough, and I'm gonna start calling you Mommy. 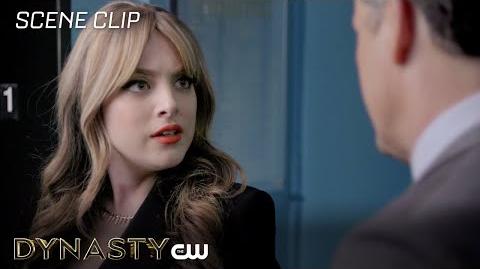