Motherly Overprotectiveness is the fifteenth episode of the second season and the thirty-seventh episode overall of the drama television series, Dynasty on The CW. It aired on March 22, 2019.

MUM’S THE WORD – While Fallon and Sam struggle to keep a secret from bubbling to the surface, their attempts are complicated by the arrival of a mysterious stranger. As Blake is occupied up with familial matters, Cristal teams up with Culhane to face a brewing crisis at the Atlantix soccer office. [2]

Adam: I'm Adam.
Fallon: So Adam, do you have a last name?
Adam: Carrington. I'm your brother.
Fallon to Adam: Look, I swear, any other day we would be very open to having you scam us, but my dad is a mess and he doesn't need any more stress right now. Maybe you can, I don't know, come back in a month and we can go from there?

Anders: It's the Carrington's for you. What they lack in tact they make up for in hospitality. We've had all kinds of wastes and strays; crazy murderer, kidnapping nanny, faux gurus.
Adam: Do you think that's me?
Anders: I hope not. But I've learned the hard way not to trust strangers. I'm hoping for a positive result so that we could erase Hank from our lives.

Fallon to Adam: Alright, here's how this is gunna go. I'm gunna tell Anders to book you a room at a Motel 7 or 8 or whatever, I don't care, and if the DNA test results are positive, we will move you to a Ritz. But for now, I'm perfectly fine being an only child. 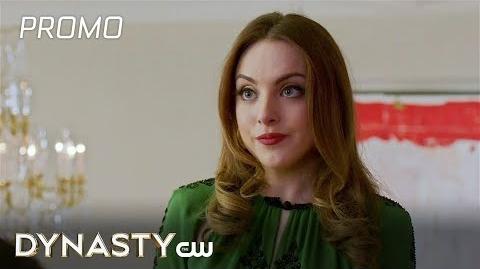 Retrieved from "https://dynastytv.fandom.com/wiki/Motherly_Overprotectiveness?oldid=13056"
Community content is available under CC-BY-SA unless otherwise noted.