Monica Colby is a recurring character on The CW's Dynasty. She is portrayed by Wakeema Hollis.

Monica is the sister of Jeff Colby and the daughter of Cecil Colby and Dominique Deveraux, who is the half-sister of Blake Carrington. Monica is first introduced as the best friend since high school of Fallon Carrington.[1]

On Thanksgiving, it is established that the Colbys' father, Cecil, is in jail.[2] Monica refuses Fallon's urging to visit him on Christmas, and is mad to discover that Fallon is sleeping with her brother Jeff while still harboring feelings for Michael Culhane. The women have a falling out as Monica accuses Fallon of being self-absorbed and not a good friend. Monica then begins a romantic relationship with Michael.[3]

Monica is horrified when Jeff finally admits his plan to destroy the Carringtons, but she later agrees to help him.[4] Fallon discovers that the Colbys are conspiring against her. On the day of Fallon and Jeff's fake wedding, she makes a show of her trust in Monica to encourage a confession, but Monica stays silent.[5] As Jeff and Fallon's feud goes public after the wedding, Monica cuts ties with Jeff and takes guardianship of her father.[6]

This lasts until Fallon's mother Alexis Carrington arranges a reconciliation between Jeff and Monica. Soon after, Jeff and Monica learn from their grandmother—the former secretary of Thomas Carrington—that their mother, Millie, was fathered by Thomas. Alexis informs them that as Thomas' grandchildren, they are entitled to a portion of his shares in Carrington Atlantic.

Jeff and Monica reveal their Carrington heritage on the day of Steven and Sam's wedding, and declare their intention to force a sale of the company.[7]

In season two, Monica reluctantly hires Kirby Anders to help her open Club Colby.[8] Jeff invites their mother Dominique Deveraux to Atlanta for a reunion a few weeks later.[9] Monica, still furious over their mother's abandonment, calls Dominique and tells her not to come. Jeff is disappointed when she does not arrive, or even call. Dominique eventually appears as Jeff recovers at home. She and Monica clash over Dominique's abandonment, and though Dominique is apologetic, she asserts that Jeff and Monica were better off being raised by their grandmother. Dominique takes a secret phone call, revealing that she has been manipulating Jeff and Monica, and that she has other children in New York.[10]

Monica is vaguely supportive when Jeff and Dominique plot to frame Adam for Jeff's "murder".[11] Later, Monica comes close to learning that Dominique double-crossed Jeff, so Dominique drugs her daughter to delay her investigation while Dominique makes a play to gain control of an absent Jeff's money. Jeff returns, and he and Monica cut ties with Dominique for her machinations.[12] Jeff and Monica are later shocked as Dominique claims responsibility for the explosion that injured Adam Carrington.[13]

Dominique's stepdaughter Vanessa Deveraux arrives in Atlanta on the night of Sam's opening of La Mirage, but Dominique wants to keep Vanessa's identity hidden from Jeff and Monica until she can secure their help for Vanessa's singing career.[14] Monica softens to Dominique on Thanksgiving, agreeing to sign Vanessa to her label and have Dominique and Vanessa over for Thanksgiving. Michael pressures Dominique to tell Jeff and Monica that Vanessa is their step-sister. Dominique convinces Blake to give her incriminating information on Michael, which she uses to silence him. Angry that Dominique is perpetuating the lie and has no intention of confessing, Vanessa reveals to a furious Monica that they are sisters.[15] On the day of Blake's trial, Monica decides to go to New York to open another Club Colby, and invites Vanessa to go with her.[16]

Monica returns to town for her grandma's funeral and accepts Dom's offer to reconnect with one other. 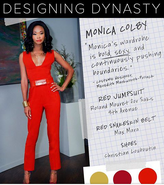