Lo Cox[1] was a minor character in the television series Dynasty in The CW.

Lo was Tom Carrington's secretary at Carrington Atlantic during the Seventies. They had an affair and she secretly gave birth to their daughter, Millie.

When Millie ran away and Cecil Colby was jailed, Lo raised and took care of their kids, Jeff and Monica.

More than forty years later, Alexis Carrington reveals to Jeff Colby that he is a Carrington. He then comes to visit his grandma with his sister Monica. She first denies but finally confesses that her daughter Millie is also Blake Carrington's half-sister, making Jeff and Monica heirs of the Carrington empire.

Sadly, not long after Lo passed away which made Dominique realize that she needs to fix her relationship with Jeff and Monica. 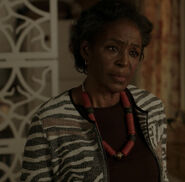