Life Is a Masquerade Party

Life Is a Masquerade Party is the eighteenth episode of the second season and the fortieth episode overall of the drama television series, Dynasty on The CW. It aired on April 26, 2019.

BEHIND THE MASK - Romantic issues surface between Fallon and Liam when she uses a public misconception to try and boost pre-sales of his soon to be released book. Meanwhile, when Sam plans a masquerade ball to roll out his new identity as a single man, Adam uses it as an opportunity to unveil the “new” Alexis to the family.[2]

Cristal promises Beto she will keep Blake from antagonizing their dangerous father Silvio, but Blake has the power cut at the Flores-owned stadium in Mexico, costing Silvio millions. Cristal invites Silvio to Carrington Manor and brokers a peace between him and Blake, who go into the gambling business together. Fallon arranges for Liam and his ex, Ashley, to spend time together in public to promote his book, but is jealous when they appear to be rekindling their relationship. Jeff and Michael argue and then make up as they struggle to find evidence that can take down Blake. With his divorce from Steven finalized, Sam throws a masquerade party to debut his single self. Fallon and Liam admit they are in love with each other. Adam presents Alexis to the family, who are shocked that her surgery has made her look almost exactly like Fallon. Adam takes a photo of Fallon and Liam kissing, which he sells to the press.[3]

(Alexis reveals her new face)
Fallon: Mother, what have you done to yourself?
Sam: She's made herself Fallon. Wow, that is some dark...
Alexis: Shut up, everyone just shut up.

Sam: I don't know why you expect Liam to be honest with you when you are not honest with him.
Fallon: What are you talking about?
Sam: For someone who hates masks, you are the biggest mask wearer of them all. I mean, you're totally unwilling to let anyone know the true Fallon. There.

Liam: Look, I was doing the same thing. I was protecting myself. And the truth is, I started writing that book to get over you, but it turned out to be the best way to tell you how I feel. I know I'm in love with you. I have been, for a while.

Adam: I read Liam's book. All I can say is I hope I'm lucky enough to find someone who feels that way about me.
Fallon: You can start with non-relatives. 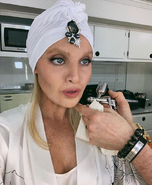