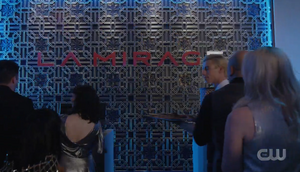 La Mirage is an upscale hotel located in Atlanta, Georgia. It was purchased by Sam Jones and co-ran by Joseph Anders. The hotel underwent heavy remodeling and reconstruction before its successful grand opening.

In 1922, Atlanta architect and mogul Bernard McCarty built the original building. During the 1980s, the building became a hotel called La Mirage. One of the owners between the 80s and present-day changed the name of the hotel too, The Excelzior.

While out partying at a hotel bar, The Excelzior, Sam saw an employee named Diego being sexually manhandled by his manager. Sam impulsively invested his divorce settlement and purchased the hotel as a way to stop the manager. ("Thicker Than Money")

Joseph Anders, Sam's friend and former father-in-law, joined the business as a hotel manager since Sam was unfamiliar with the workings of a business. ("Deception, Jealousy, and Lies").

The Atlantic Historic Alliance honored the hotel as a historical landmark after Sam and Anders discovered Bernard McCarty's connection to the hotel. The AHA placed a plaque honoring the hotel and placed La Mirage on their list of must-see places in Atlanta. ("Wild Ghost Chase")

Michael Culhane, the majority shareholder of The Atlantix soccer team, made a deal to have La Mirage be the official hotel for visiting teams. ("Something Desperate")

Sam worked to perfect the grand opening of the hotel, starting with hiring a mixologist. He ultimately hired Vanessa. Sam invited artist Ashanti to perform at the opening night. In exchange, he gave her free guest privileges for life. She agreed to come to the opening but was poisoned and unable to perform at the opening concert. The mixologist Sam hired, Vanessa, used this as an opportunity to perform one of her songs. The opening night turned out to be a success despite the road bumps. Sam later made a partnership with The Trevor Project to have a permanent block of rooms available for at-risk LGBTQ+ youth. ("Mother? I'm at La Mirage")

The story about Victor Diaz being attacked outside the hotel came out in the papers. As a result, the opponent for The Atlantix decided not to stay at La Mirage as they didn't feel safe there. ("A Used Up Memory")

The ramifications of the Victor Diaz story was a 50% drop in reservations during Thanksgiving. Sam's social media statement created a PR disaster that crucified the hotel and Sam. Sam eventually brought in a PR consultant, Fletcher Myers, to help handle the issue. Fletcher's ideas didn't appeal to Sam, who eventually opened La Mirage's doors to the homeless for Thanksgiving day. He supplied them with free food and board with plans to reopen on Friday, November 29th. Joseph Anders realized that Sam could handle the hotel on his own and left the business on good terms. ("Shoot From the Hip")

La Mirage sponsored a conference and party for The Atlantix to woo potential investors and players. Sam admitted that he was considering a sponsorship with the Atlantix. ("What Sorrows Are You Drowning?")

To celebrate Valentine's day, La Mirage hosted a "secret admirer" party. People send out anonymous letters to someone special, hoping that person will show up to meet their admirer. The couple will meet, fall in love, and proceed to book a hotel room for the evening. When someone has found their admirer they take a red paper heart with a rose pin and wear it. ("Battle Lines")

Fallon plans to host her engagement party at the hotel. Sam protests to Alexis setting birds free in his hotel, so they table the idea. Meanwhile, Connor and Heidi stay at the hotel during their visit to Atlanta. In an attempt to bond with Connor and Liam, Fallon had the bellhops bring up two luggage carts full of board games, nerf guns, and video games for the trio to play. At Fallon and Liam's engagement party, affectionately called the "Retying the Knot", Vanessa performed a song dedicated to Culhane and Dominique. At the event, Dominique leaked the sex tape she made with Culhane to cause a fight between Culhane, Dom, and Vanessa. Her goal was to attract the attention of a reality TV producer. Near the end of the party, a car exploded in the parking garage due to a "faulty gas tank". The explosion caused damage to the garage and surrounding cars. ("That Wicked Stepmother")

After the teaser released for House of Deveraux, La Mirage exploded with new customers eager to see the set of the upcoming reality series. In the meantime, Sam planned an event for The Atlantix and hired Kirby Anders as his event coordinator. While the evening didn't initially go as planned after Brent Scott's watch was stolen, things were salvaged when Sam paid the entire bar tab for Scott's group. He later found the watch and returned it to Scott. Sam also hired Kirby full-time as his event coordinator. ("Is The Next Surgery on The House?")

When Kirby requests Sam to give her an assistant, Sam agrees quickly. Sam, later, reveals that her assistant is his friend, Ramy, the person who stole Scott's watch and whom Kirby dislikes. Ramy becomes the cause of a fight between Kirby and Sam at Michael Culhane's pajama birthday. The party was hosted by the singer and aspiring reality star, Dominique Deveraux. The fight intensified and Kirby decided to quit both her job and her friendship with Sam) However, Kirby is proven right about Ramy after he steals bonds from Sam's safe and flees. Kirby returns the next day per Sam's summons and is given her job back. She takes her job back but she hasn’t forgiven him personally. ("She Cancelled...")