A Line From the Past (Voice)
Twenty-Three Skidoo
Kirby Anders is a main character in the television series Dynasty on The CW. She is portrayed by Maddison Brown.

The daughter to the Carringtons' majordomo, Joseph Anders, she was sent away and framed for arson as a child after overhearing a conversation between her father and Alexis detailing their affair. She then returned several years later and found a place in the family, despite a rocky past with all of them.

Joseph Anders first mentioned his family during a conversation with Sam Jones in "A Line From the Past" and revealed that his daughter, Kirby, lives with her mother in Australia. Anders later called her but hung up before he could talk to her.

Shortly after Sam married Steven, Sam confessed that he had invited Kirby so that Anders could see her again. Sam realized his mistake when Steven and Fallon told him Kirby used to live with the Carringtons when she was a child and tormented Fallon, citing the decapitation and burning of her barbie dolls as an example.

Kirby appeared at the Carrington Mansion in "Dead Scratch" and greeted her father. A cigarette in her hand and her face unseen, just after someone set the barn on fire with the grooms, and some of the Carrington family, locked inside.

Returning Back to Atlanta and feud with Fallon and Alexis

In "The Butler Did It", Kirby revealed she held a grudge against Fallon because she thought it was Fallon's fault that she was exiled from the Carrington Estate. However, she learned later that she was exiled because Alexis framed Kirby for burning Fallon's bedroom. Kirby learned about it when she overheard a conversation between Alexis and Anders regarding an affair that resulted in Alexis getting pregnant with Steven.

Accepting a heavy secret and a Traumatic Experience

in "That Unfortunate Dinner", Kirby is in the loft with Adam and she expresses her frustration with the bizarre conspiracy her father is spinning about Adam and how dangerous he is. She lets Adam know that Joseph is messaging her so frequently. As Kirby keeps ranting, Adam quickly takes a look into her phone to know Joseph's location. After learning the needed information, Adam asks Kirby to leave as he has an important call to attend to.

At rehearsal dinner, Adam walks out looking for Blake. Kirby and Culhane have a heart to heart, and she thanks him for never thinking she is crazy despite her reputation.

Later, Kirby accidentally reveals that the new officiant is the person Cristal is sleeping with. Everything begins to escalate, fights ensue, and Blake punches the priest in the face. Fallon has had enough, leaving to go home.

Kirby walks into the room and sees Adam packing his things, ignoring her, she grabs his arm and he confesses that yes, he did push Alexis into the fire, yes he was responsible for his mother’s death, and he believes that Anders knows something. He says he didn’t want to tell her because she would think of him as a monster, but she reassures him that he’s not the only one with secrets.

in "Vows Are Still Sacred", Kirby is attempting to help Fallon pick out her shoes for the wedding and so far, no luck. Alexis walks in and says that maybe she should consider flats since she’ll be walking on grass but Fallon claims that with the right sherpa and oxygen, she could climb Mount Everest in heels. After finally lacing up a pair of heels, when she stands up she instantly twists her ankle and falls to the floor. Sam suggests she use Blake as a crutch when they’re walking down the aisle, but Fallon needs more, so she asks Alexis to help, too.

Kirby is present when Fallon changes into her wedding dress. Sometime Later, Sam gets a text from Fallon who is now at the high school with Liam. She wants him to officiate there and for Kirby to bring her shoes. However, they must try to be as discreet as possible. Kirby is in Fallon’s closet collecting the shoes. Behind her in the mirror Evan can be seen. As she’s rushing out of the room he corners her and says he needs to talk to Fallon about something, urgently, and he asks Kirby where she is. Kirby won’t budge. He tries to take her phone but she hits him over the head with the bag and tries to get away. Evan grabs her leg and stabs her. He takes her phone and leaves her to bleed out on the floor.

A period of time passes by when Adam gets off the phone with Shelly and sees the bloody handprint on the door to Fallon’s room. He rushes in and sees Kirby laying there, unconscious. Anders too enters the room and assumes that Adam did this. He points a gun at Adam and says that if Kirby dies so will he.

In "The Aftermath", Kirby is being rolled into the OR after being stabbed by Evan Tate. Adam tries to follow but Anders stops him in his tracks and tells him he’s going nowhere near Kirby. Sam tries to reason with him by reminding Anders that Fallon said Evan is the one who hurt her, not Adam. Adam insists on helping because he is a surgeon after all, and Anders reluctantly agrees.

At The Carrington Manor, Kirby is coming back from the hospital, and Fallon tells an annoyed Liam that she will be taking care of Kirby (and Blake). Fallon assisting Blake and Kirby continues until they’ve both had enough and “fire” her for some real care instead. On the bright side, Fallon has finally agreed to go on her planned honeymoon with Liam.

Adam and Kirby are playing cards when Anders apologizes to both Kirby and Adam, saying he won’t go to the police with any information he has. However, as he exits the room, he makes the decision to keep his voice recording of Adam.

In "Everybody Loves The Carringtons", At the Carrington Manor, Culhane pays a visit to Kirby, who has been locked away for two weeks while she recovers from her stab wound at the hands of Evan Tate, and wants a piece of exciting news. Culhane tells her that the league named him owner of the year. They share a hug as Adam walks in and interrupts them, asking what the exciting news was about. Upon finding out, he teases Culhane about the Atlantic game the night prior.

Kirby runs into Victor Diaz at La Mirage and he offers her a drink. She grabs what she needs to from his pocket and hands it to Culhane before meeting Victor at the bar. As he begins flirting, Adam pops in and asks Kirby who she’s meeting with. As Adam winds Victor up, he tells him he was joking, and that he’s a big fan, letting him know he was the team doctor before Victor joined. Victor realizes he’s lost his phone, but remembers he can track it from his watch. He finds out that it’s somewhere in the hotel, as Culhane is finishing up downloading what he needs from it. Adam and Kirby try to stall as long as they can, but Culhane shows up with his phone and hands it back to him. Adam asks if he got the proof and he says he did, but the gambling thing is much bigger than expected.

Kirby was introduced as a rebellious, party-loving, wild-child with a dangerous air to her. The rumors regarding her past made her seem as though she were crazy when, in reality, she wasn't. While her mental health fluctuates, Kirby is fiercely independent and capable of caring for herself. Being banished from the manor and torn from her father at such a young age created lasting issues in Kirby's persona. Her sarcastic remarks and jaded side are her way of pushing people that could be beneficial for her away. Upon settling in at the manor once again, Kirby began to let her intellectual and business-savvy side through. Kirby even outsmarted Fallon by acquiring Femperial Publishing through nefarious means. While her intentions to keep the company feminist and modern were pure, she was impulsive in her decision and was unable to support the company by herself.

Kirby has keen instincts and bright ideas but doesn't always articulate her thoughts in the best manner. She can be withdrawn and doesn't trust others while simultaneously longing for a sense of family and belonging. When she is loyal and feels loyalty exchanged, it is difficult for someone to break that bond. This was that was seen during her time at the synergy group that took advantage of Kirby the moment she trusted them. She has since begun falling for Adam Carrington, the most mentally unstable yet charming Carrington boy. While she connects with Adam she is naive in her feelings that he has changed or can change.

Kirby's relationship with her father is a difficult one. When Kirby was twelve, Joseph sent her away after he suspected she started a fire in Fallon's room. Despite Kirby's objections, Joseph sided with Alexis over her, and sent her to Australia to live with her mother. Kirby has expressed that being ripped away from a parent at such a young age changed her. They drifted apart, and Joseph wanted to reach out but never did. When she returned to Atlanta, their relationship was rocky, with Kirby spending most of her days partying at expensive hotel rooms. When Joseph learned that Kirby was innocent for the fire, he apologized and they began to build a better relationship. Their relationship remained fairly positive until Joseph believed Kirby was an informant for the FBI during Blake's trial. Kirby tried to convince Joseph that she wasn't an informant, but Joseph didn't believe her and gave her a plane ticket back to Australia. He found that Kirby was telling the truth and attempted to reconcile with her, even helping Fallon to rescue her from a synergy group. Despite his efforts, she still hasn't fully forgiven him.

Adam's relationship with Kirby was originally on an acquaintance level. It wasn't until Adam helped rescue Kirby from a synergy group that she began to notice him. Their relationship quickly escalated to casual sex and later, they began exclusively seeing one another.

Kirby and Sam are best friends and have a very sibling-oriented relationship. They confide in one another and get into trouble together. They both enjoy gossip and drama, especially investigating it. Kirby helped Sam find the perfect manny for his adoptive son but was also there for him when the truth about the baby's origins came out. He helped her acclimate to the Carrington Manor and navigate the complexities that are the Carrington family. They aren't shy to call the other out for being overdramatic or being wrong. They are each other's main confidant when it comes to relationship advice. While Sam also confides in Fallon, Kirby only has Sam which gives her more of a reliance on him. Their biggest fights often stem from a source of distrust on Sam's behalf or their mutual inability to appreciate the other as a friend. 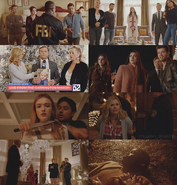 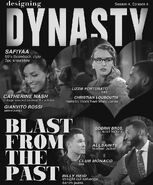