I Answer to No Man

I Answer to No Man is the eleventh episode of the first season of the drama television series, Dynasty on The CW. It aired on January 24, 2018.

ALL THE DIAMONDS IN THE WORLD - When Fallon is taken hostage, the rest of the family must come together to enact a rescue mission — but coming together isn’t exactly what Carringtons do best. Out of desperation, Culhane turns to Jeff Colby for help, while Cristal is forced to choose between her old family and her new one.

Alejandro and Iris hold Fallon hostage in a warehouse, demanding $15 million dollars and safe passage from Blake. He reveals to Cristal that he and his ex-wife Alexis had a son, Adam, who was kidnapped and never returned, thanks to ineffective police work. Blake tries to handle the situation without alerting the new police chief, whom Cristal has invited to dinner. With the ransom now up to $25 million, Cristal sneaks off to make the drop, but is taken as a hostage as well. Blake, Jeff, and Michael track them down; Cristal helps Fallon escape, but is whisked away in a truck by Alejandro and Iris. Cristal convinces Iris that Alejandro is bad and will only turn on her, and as Alejandro tries to strangle Cristal, Iris shoots and kills him. The sisters reconcile. Cristal sends Iris off with some cash, and tells the police she shot Alejandro in self-defense, not Iris.[2]

Fallon: They might have stolen my hair, but they can never steal my hustle.

Fallon: Just when I thought things couldn't get any worse. Did you really have to tie us together? She smells like she took a whore's bath in patchouli.

Steven: Do you kidnap many children on your day off?

Fallon: How am I supposed to live like this? Bangs? My stylist books four months out. Five for extensions.
Alejandro: You're lucky, hair grows back.
Fallon: Not by summer. You should have shot me.
Alejandro: Keep talking, I'll turn it into a mullet. 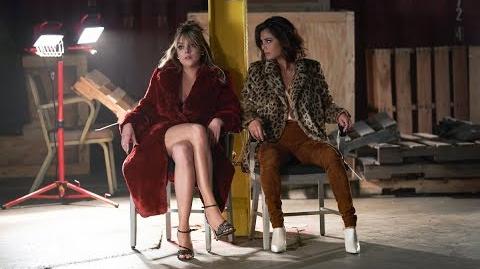 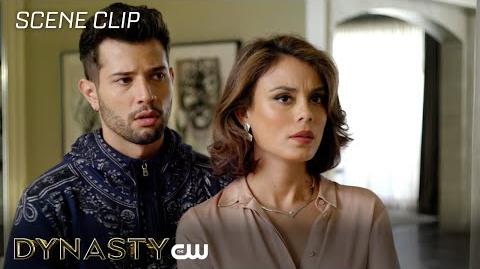 Dynasty I Answer To No Man Scene The CW