Filled With Manipulations and Deceptions

Filled with Manipulations and Deceptions is the twenty-second and the finale episode of the fourth season, and the eighty sixth episode overall of the drama television series, Dynasty on The CW. It aired on October 1, 2021.

SEASON FINALE - Blake and Cristal work together on the new obstacles threatening Blake's senatorial campaign. Fallon turns to Amanda for help regarding Liam and their marriage. Sam, Culhane and Kirby work on the finishing touches for the opening of The Sahara Club, as Sam gets advice from an unexpected source. Alexis continues her scheming as Dominique worries about Jeff's health. Adam finds himself in yet another precarious position. [1]

Michael: You’re not well and you need help.
Jeff : You've been working with him all along. It's you.

Fallon: I know I'm the last person you want to see right now, but I just want to talk.
Liam: If you've come to apologize Fallon, I really don't want to hear it.

Fallon: I have had enough of this all about Eva fantasy. 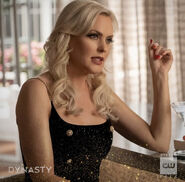 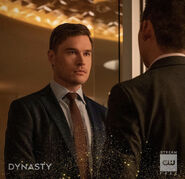