Everything But Facing Reality

Everything But Facing Reality is the twelfth episode of the fourth season and the seventy-sixth overall of the drama television series, Dynasty on The CW. It aired on July 30, 2021.

I'M STARTING TO THINK YOU MAY NOT BE CRAZY - Dominique plans to launch her new fashion line as she and Alexis once again vie for the same thing, with nothing going as planned for either of them. Meanwhile, as Sam and Culhane continue their business partnership they find themselves running into a very unusual roadblock. Liam's research turns up some interesting facts and he and Fallon devise a plan to find more information but someone seems to be one step ahead of them so they once again turn to Jeff for help. Blake embarks on a new adventure.[1] 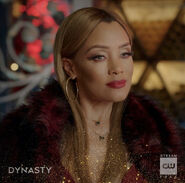 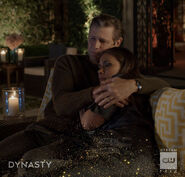