Everybody Loves The Carringtons

View source
watch 01:32
She-Hulk Trailer Dropped - The Loop
Do you like this video?
Play Sound

Everybody Loves The Carringtons is the fourth episode of the fourth season and the sixty-eighth episode overall of the drama television series, Dynasty on The CW. It aired on May 28, 2021.[2]

THANK YOU FOR RUINING EVERYTHING; BRIAN LITTRELL GUEST STARS - Jeff and Alexis create havoc during Fallon and Liam's important interview which spurs a "brilliant idea" for Fallon. Culhane is given a high honor, and some major complications come to light so he turns to Adam and Kirby for help. Meanwhile, Sam enlists Brian Littrell as an extreme measure to impress Ryan, with unexpected results. Lastly, Anders and Blake work together.

Fallon and Liam are on the private jet back home after spending their honeymoon away. Fallon lets him know that the two of them will be doing a national television interview to shoot down all the rumors that are swirling around Carrington Dynasty imploding.

At the Carrington Manor, Culhane pays a visit to Kirby, who has been locked away for two weeks while she recovers from her stab wound at the hands of Evan Tate, and wants a piece of exciting news. Culhane tells her that the league named him owner of the year. They share a hug as Adam walks in and interrupts them, asking what the exciting news was about. Upon finding out, he teases Culhane about the Atlantic game the night prior.

Meanwhile, Anders and Blake are in the study discussing Blake’s rehab with Cristal. Blake says that his physical rehab is getting better, but his marriage is also improving, and he even wants to ask her to move back in. Anders interjects, reminding Blake that he doesn’t exactly own the manor anymore, on top of the rest of their problems.

When Fallon and Liam arrive back to the manor, they are greeted by Jeff, who has apparently made the foyer his office space. He tells the newlyweds that until Alexis signs the amended divorce settlement, he’s not going anywhere. He claims that the reason his office is in the foyer is to pressure Alexis so she’ll sign it and he can go home. Jeff gets an important call but loses connection. Alexis appears talking all about her new wifi jammer. He asks her to turn it off and she agrees, as long as he signs her new terms that include more money and the restarting of excavations on the backyard. Jeff doesn’t back down so Alexis caves and tells him he’s won. She hands over the signed papers that were in the garbage can, shredded.

Blake eventually emerges with his bags and Fallon asks him to do something as the head of the family. He says he is absolutely doing something, telling her he’s moving out.

At Oasis, Anders meets up with Cristal who is ordering dinner. He says he’s stopped by to introduce her new neighbor who is none other than Blake. When she asks for an explanation he tells her he moved out of the manor and into La Mirage. When he asks to accompany her at dinner, she tells him she’s meeting someone.

Caleb shows up to dinner and asks Cristal if he just saw Blake leave, assuming she still hasn’t taken the opportunity to tell him about them. She says she will after his physical therapy is done, she will have a talk with him. Cristal also tells Caleb that Blake has moved into La Mirage, but has promised not to bother her. Caleb isn’t convinced and tells her she’s being manipulated.

Elsewhere, Sam is on a video call with Ryan as they are celebrating their two week video chat anniversary. He opens the gift that Sam has sent over, and it appears to be some sort of fancy cheese. Sam pulls out his matching set so they can enjoy it together, but Ryan thinks Sam sending him expensive gifts is unnecessary, and even makes him uncomfortable.

Back at the manor, Liam asks Fallon why she’s stressed over the interview. She says that it’s meant to restore faith in her brand, but that can’t happen when Alexis and Jeff are constantly fighting. On the TV, I Love Lucy is on, and Fallon says living in a sitcom is so much easier. Just then, it switches to their own version of a sitcom.

Alexis is cleaning around the house when Jeff comes home and makes a mess. Fallon and Liam arrive, and Fallon says the reason they were late is because he was on the phone with his mother. Liam gets defensive and Fallon inquires about the mess, wondering if a tornado ripped through their living room. Alexis says no, it’s just her husband choosing to live in filth. Jeff stands up and says he can live however he wants; a man’s home is his manor. Liam gets between them and claims he can solve the problem. He splits the room in half so Alexis has her clean side and Jeff has his mess.

Back in reality, Fallon has split the manor into sections. The red zone belongs to Alexis, the green is Jeff’s, and the yellow is the shared space. Fallon says it’s temporary, just until the interview is done.

It’s interview day and Fallon is getting prepped. When asked where they plan on doing the interview, she says her and Liam will descend from the stairs, give a quick tour and then wind up back in the foyer. Alexis and Jeff begin bickering and Dominique walks in to interrupt. Fallon is visibly stressed, and the interview gets canceled because Meredith can’t be around all the negativity. Fallon begs, but it appears to be too late.

Sam and Ryan are on another call, and Brian Littrell appears! Sam hired him to perform a few songs for the two of them on the video call. As Brian begins singing, Ryan looks a bit upset, and he ends the call, leaving just Sam and Brian. Sam tells him to keep singing, because he paid a lot of money for the performance.

Fallon needs Sam’s help to get the interview back on again. Sam isn’t really up for it because of his situation with Ryan right now, but when Fallon brings I Love Lucy into the equation, Sam can’t resist, as long as he gets to be Lucy. Fallon and Sam have broken into Val’s office looking for anything they can. Sam is saying the code word but Fallon isn’t listening and Val shows up, wondering what he’s doing.

Sam tries to cover for Fallon, who is now in the trash can, but it doesn’t work. Val can see right through him. She throws her takeout into the trash and Sam asks if he can walk her out. She agrees and says to tell his friend in the trash can she’ll see him tomorrow. Fallon appears, with food all over the top of her head.

Fallon and Sam are in her room. She wants to know all about his problem with Ryan. When she hears about Brian Littrell, she begins making jokes, but Sam doesn’t think they’re funny. So she tries a different approach, telling him that Ryan would rather listen to him than music. Liam walks into the room, exhausted. When Fallon asks if this is about Jeff or Alexis, he throws a curveball. His mom won’t stop emailing him listings of homes near her. Liam switches the TV on and I Love Lucy is on once again.

It switches back to their own sitcom, with Adam and Culhane sitting at the bar while Adam is preparing for a date. On the other side, Fallon is with Kirby and she’s also preparing for the date. But she wonders if she’s ready to date again. At Culhane’s signal, Fallon leads Kirby over to Adam and they’re clearly both surprised that they were set up with each other. Fallon and Culhane rush away, but not before grabbing the knife in Adam’s hand.

In reality, Alexis’ thoughts are interrupted by Jeff, who has walked in. Apparently, Fallon told both of them separately that each of them were ready to talk about the settlement. Fallon says she’s not letting either of them out until they sign someone’s divorce papers, locking them in so she can worry about her interview.

Kirby runs into Victor at La Mirage and he offers her a drink. She grabs what she needs to from his pocket and hands it to Culhane before meeting Victor at the bar. As he begins flirting, Adam pops in and asks Kirby who she’s meeting with. As Adam winds Victor up, he tells him he was joking, and that he’s a big fan, letting him know he was the team doctor before Victor joined.

Victor realizes he’s lost his phone, but remembers he can track it from his watch. He finds out that it’s somewhere in the hotel, as Culhane is finishing up downloading what he needs from it. Adam and Kirby try to stall as long as they can, but Culhane shows up with his phone and hands it back to him. Adam asks if he got the proof and he says he did, but the gambling thing is much bigger than expected.

Blake and Cristal are chatting. They both have things they need to discuss but she first says the clinic got an anonymous donation to keep it running, and she knows it was Blake. Cristal tells him she knows about his manipulations, and that she’s leaving him. Blake adds that he knows it’s for the priest she was supposed to stop seeing. He says he will honor her wishes and leave her alone, as much as he hates it.

It seems like Alexis and Jeff have finally come to an agreement. Fallon unlocks the door and tells Jeff to go deal with his mom, agree to a settlement with Alexis, and get out because she knows he can’t stand life at the manor. Fallon isn’t letting up with Alexis for everything she has done to her, though. Fallon tells her that first thing in the morning, her and Liam are moving out.

Sam is back on a call with Ryan, apologizing for all the gifts. He thought just seeing him wasn’t enough, but Ryan says all he’s wanted is to talk to him.

Jeff confronts Dominique for choosing Alexis over her own family. He says the Carringtons have always come first but Dominique notes that Jeff was equally obsessed. Jeff says he’s giving Alexis the money she needs, and he’s leaving.

Fallon walks into the study, noticing Alexis has marked her territory. She tells her that she’s going to give Alexis a preview of the interview. The Carrington empire crumbling rumors are exaggerated, and she will be taking over as head of the dynasty. She also tells Alexis she owns the landholding access roads that surround the manor. If Alexis acts up again, Fallon will take action.

Blake is in the confession room to talk to Caleb. He threatens him, telling him if he doesn’t leave Cristal, the next time he comes back it won’t be for forgiveness.

Fallon (To Alexis, Jeff, and Dominique): Mother. Stepfather. Stepgrandmother. I just want to personally thank all of you for ruining everything.

Alexis: Can my red zone be more of a burgundy? It feels richer.

Cristal (To Blake): For someone so good at lying, you're a terrible actor. 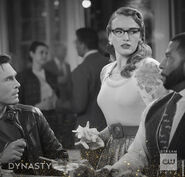 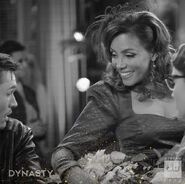 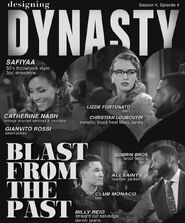