Even Worms Can Procreate

Even Worms Can Procreate is the thirteenth episode of the second season and the thirty-fifth episode overall of the drama television series, Dynasty on The CW. It aired on February 8, 2019.

FAMILY MATTERS — Cristal and Blake have a surprise visitor show up who threatens to unravel their relationship, while Fallon goes to war with Culhane when he becomes a power player at Carrington Atlantic.

While Alexis tries to convince Mark that the baby is his, Blake tells Cristal that whatever the paternity test shows, he will raise the child as his own. Mark shows up at the Manor to get the truth from Cristal, and Blake asks him to stay with the Carringtons until the test results come back. Fallon sabotages Michael in hopes that Blake will fire him from the Atlantix, but Blake fires her instead when her machinations at the team opening leave Michael publicly humiliated when his past painkiller addiction is exposed. Alexis lies to Mark that Cristal is still in love with him, and he and Cristal have a tender moment. Blake sees them together, and offers to have Mark's ban from professional soccer lifted if Mark leaves town. Fallon apologizes to Michael, and they sleep together. Cristal learns that the baby is Blake's and taunts Alexis. Sam gets a call from Steven, who has been mugged in an undisclosed location. A distraught Alexis plans to commit suicide, but sees Cristal and Mark horseback riding, and fires at Cristal instead. Mark takes the bullet, and Cristal's frightened horse throws her off and drags her.[2]

Fallon (to Cristal): God, where have you been all my life? I bet I wouldn't even be in this situation if I had a decent mother growing up.

Cristal (to Alexis): It's pathetic watching you hold on to your old life long after it ended. Your family is done with you. Steven left the country to get away from you. Fallon fears turning into you. And Blake, Blake only pities you. Your time at the manor is over and the saddest part is you know it. 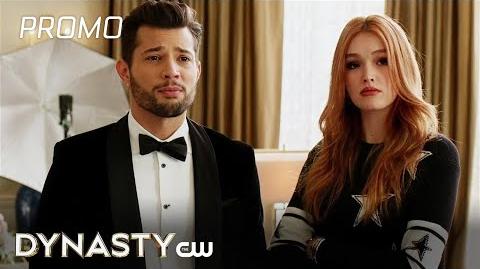 Dynasty - Even Worms Can Procreate Promo