Equal Justice for the Rich

Equal Justice for the Rich is the ninth episode of the fourth season and the seventy-third overall of the drama television series, Dynasty on The CW. It aired July 2, 2021.

LAURA LEIGHTON GUEST STARS - Fallon and Blake brainstorm ideas for the Fallon Unlimited IPO which leads to a meeting with Corinne Simon, an SEC officer, and a figure from Liam's past. Corinne shares some information that leaves Liam both confused and disappointed. Meanwhile, Jeff and Culhane's friendly agreement becomes a fierce competition. Lastly, Alexis and Dominique are seemingly nowhere to be found.

At the Carrington Manor, Blake is redecorating after kicking Alexis out. Anders tells Blake that Alexis has yet to claim any of her possessions, but Blake says that isn’t a problem. If she doesn’t pick them up by the next day, they will be “donated.”

In the mines, Dominique and Alexis are bickering and trying to find a way out.

The family is sitting down for breakfast, and it’s Adam’s first day as chief of staff at the hospital.

In the other room, Fallon calls for Blake who is late for his meeting. Everyone disperses as Sam gets a text from Fletcher, asking to see him again.

Fallon and Blake are discussing taking Fallon Unlimited public, and Fallon knows it’s risky. Blake compares it to letting his Tesla self-drive with his eyes closed “for fun”. Fallon says they need to grease palms with her SCC officer, Corrine, who Liam just happens to know through the Vankirk family.

Jeff meets with Culhane who is clearly uncomfortable about telling his best friend the truth about Mia dating the both of them. Jeff thinks it’s not a bad idea, because a little friendly competition never hurt anyone.

Culhane and Mia are out to lunch for their first date. They get interrupted by their waiter who brings them the oldest wine in the place. Culhane refuses, but soon they find out that Jeff has purchased the entire wine cellar, and he’s moving the One City One Voice event to Club Colby.

Cristal is at the hospital meeting with Adam about what’s happening to her. She thanks him for not telling Blake. At Carrington manor, Fallon and Liam are having their meeting with Corrine. She knows Fallon wants her review rushed. However, her schedule is full. Liam inquires about the last time they saw each other. It was his 18th birthday when his father was in high spirits “despite everything.” Liam doesn’t know what she means, and she tells him to drop it.

It’s after dinner now, and Fallon is clueing Liam in on her plan. Liam is distracted, and Fallon takes notice. He tells her about the tanker that broke down; he thinks Corrine is the one that tipped people off about what happened, and this could exonerate his father.

Sam asks Kirby how her bartending job is going when her ex-boyfriend, Oliver, shows up. She asks why he’s there, and he says it’s for a photography gig. He asks her out to dinner, but she tells him she has a boyfriend. In spite of her protest, they agree to meet at the photoshoot.

Blake finds out that Adam has betrayed him, but Anders thinks that those emotions are likely exactly how Adam felt, and he has to let it go.

Corrine stops by Fallon’s office to tell her that Spartan Shakes, the company impeding her approval, dropped from the schedule. However, that’s not all she came to say. She knows Liam has been investigating her, and Fallon says it’s a mistake. Corrine says if he doesn’t drop it, she’ll be waiting a lot longer to get on her calendar.

Fallon and Liam are inside her office. She asks him why he’s investigating Corrine, but he should have known that she’d find out and threaten to hold the approval. Liam says that’s basically an admission of guilt, but she needs the stamp of approval. She gets fired up, and Liam says his goals are no less important than hers. This time they are, to her, and he just has to accept it. But Liam doesn’t back down.

Jeff and Culhane are at the One City One Voice event and they agree to let Mia decide which of them she’s keeping around. Dominique and Alexis are confiding in each other and trying to one-up which of them has done worse.

Cristal finds out her tumor is a lot worse than she thought, and that it’s basically inoperable. Adam tries reassuring her that they will have the best doctors in her corner, and she needs to tell everyone she loves what’s happening, starting with Blake.

Mia is going over the silent auction winners. Mia soon realizes that between Culhane and Jeff, they won every single bid. She clearly doesn’t look happy about it.

Oliver and Kirby are hanging out together, and he pressures her into staying out with him for a while longer. She asks him if it’s okay that she’s drinking, and he doesn’t care. He may be sober from alcohol, but he’s not sober from other things, which encourages Kirby to slip back into her own ways as well.

Culhane and Jeff apologize for the auction, and Mia says the situation is no longer working. They tell her to decide between them, but she doesn’t want to ruin a friendship over love. So they all go their separate ways. Culhane drops that he was going to get Alexis in the middle of it but she didn’t answer his calls. This prompts Jeff to put two and two together that something is wrong.

Dominique and Alexis begin their confessions. Dominique is still married because her dissolution never went through. Alexis had an affair while still technically married to Blake when Fallon and Steven were little. She became pregnant, suggested a trial separation, and moved to Europe to have the baby. The baby was given to a distant relative to raise as her own. At this moment, Jeff calls for them.

Fallon has withdrawn her application in order to resubmit it to another office in the SCC. She wants to support Liam instead of sabotaging him because they are a team. Corrine offers to send the application through immediately and she only ever wanted to protect Liam. She thinks his father was murdered.

At Carrington Manor, Jeff and Dominique chat and mend their relationship.

As Alexis leaves, she and Fallon share a moment, and Fallon offers to take her to lunch.

Inside Blake’s study, he calls Adam in. He knows what his son did and how he put everything in jeopardy. Blake takes ownership of the things he has done, and he’s not throwing the chance away to be better.

Fallon apologizes, and Liam forgives her. She asks how he’s doing, and he says he’s ashamed. There was nothing suspicious about his death, but if Corrine is right, he needs to find out the truth. Liam says he has to go, but Fallon doesn’t want him to get hurt. He says this is something and in spite of his wife's protests, he leaves.

Liam: So, Corinne, when was the last time we saw each other?
Corinne: I know exactly when it was. Your 18th birthday.
Liam: Oh, right. My mother had too much chardonnay and fell in the pool.
Corinne: Laura was in fine form, but I remember that day as the last time I saw your father in good spirits, despite everything.
Liam: What do you mean, despite everything?
Corinne: You know, uh, everything going on with the tankers.
Liam: I'm not sure your timeline makes sense.
Corinne: Maybe we should just drop it.

Corinne: You wouldn't believe what some CEO types try to ply me with.
Liam: Fancy seafood, pricey vintages of champagne, live lobster.
Fallon: Point made, darling.
Corinne: And more, which is why it's been so pleasant to just catch up with an old friend.
Fallon: Well, now that we're all old friends, I do have a tiny little request to run by you. Of course, I don't want to cross any lines.
Corinne: I assume you want my help moving along your SEC review.
Fallon: Okay, you didn't tell me your friend was a mind reader, Liam.
Corinne: I saw your prospectus come through this morning. It's just impeccable.
Fallon: So, it's a yes, then.
Corinne: No, I can't get to it for at least two months. My dense card is quite packed with companies these days.
Fallon: But their applications can't be as good as mine, right? I mean, you said impeccable.
Corinne: No, they're not, especially not the one I'm working on right now.
Fallon: Oh, it's a tech company, I bet? Millennials are the laziest.
Corinne: More infomercial than anything, but I can't talk about it.
Fallon: Okay, I understand.

Dominique: Oh God. You're as useless below ground as you are above.
Alexis: Oh, I'm sorry, is my trapped in a mine behavior not up to your standards?

Dominique: I hope the champagne in hell isn't too burned.

Dominique: You are talking to the woman who purposefully gave food poisoning to Ashanti.
Alexis: I flew Kirby's ex-boyfriend all the way from Australia so he could break up her relationship with my son, which is hopefully happening right now.
Dominique: I slept with my stepdaughter's boyfriend for the publicity of a love triangle scandal.
Alexis: I hired a man to cut off his finger and pretend to my long-lost kidnapped son.

Adam: Well, it seems like today is a day of Carrington Celebrations.
Sam: Oh, crap, is it Fallon's birthday?

Dominique: Get your child neglecting ass over here and move a rock!

Alexis: You want to talk about sins? Honey, mine could run laps around yours.
Dom: I seriously doubt that. You are talking to the woman who purposely gave food poisoning to Ashanti. 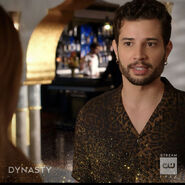 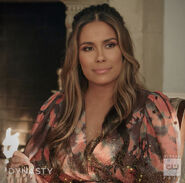 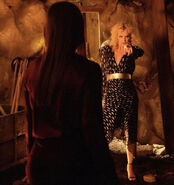 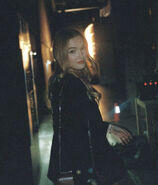 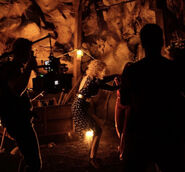 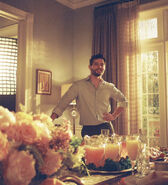 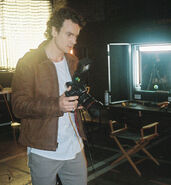 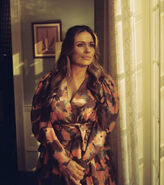 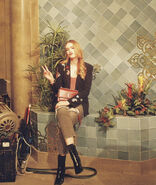 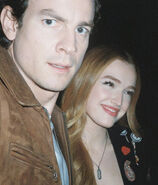 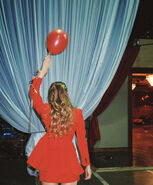 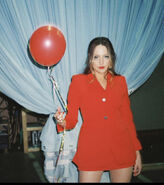 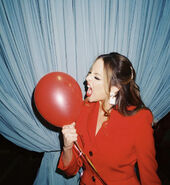 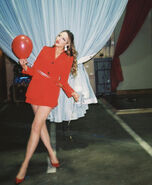 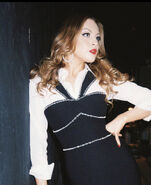 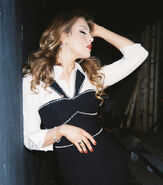