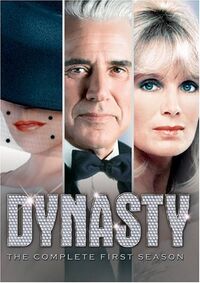 Dynasty is an American prime time television soap opera that aired on ABC from January 12, 1981, to May 11, 1989. It was created by Richard and Esther Shapiro and produced by Aaron Spelling and revolved around the Carringtons, a wealthy oil family living in Denver, Colorado. Starring John Forsythe and Linda Evans as oil magnate Blake Carrington and his new wife Krystle, Dynasty was ABC's derivation of the hit CBS prime time serial Dallas.

Though at first coming nowhere near the ratings of Dallas, the second season arrival of Joan Collins as Blake's scheming first wife Alexis heralded Dynasty's rise into the Top 20, and in 1985 the series hit #1. Dynasty was nominated for a Golden Globe Award for Best TV Drama Series every year from 1981 to 1986, winning in 1984. Dynasty spawned a successful line of fashion and luxury products and even a spin-off series, The Colby's, but by 1987 had dropped to #24. After nine seasons, Dynasty was canceled in 1989. A two-part miniseries, Dynasty: The Reunion, aired in October 1991. Prior to the launch of the reboot in 2017, the series became available on CW Seed.[1]

A reboot series with a new cast was picked up by The CW in 2017.It featured a more modernized storyline, a greater emphasis on female leads, feminism, and sexuality. The primary focus of the series is the character of Fallon Carrington.