Deception, Jealousy, and Lies is the twenty-second and final episode of the second season; and the forty-fourth episode overall of the drama television series, Dynasty on The CW. It aired on May 24, 2019.

WHAT LIES BENEATH - As various members of the Carrington family decide between preserving their legacies or protecting their personal interests, allegiances are tested -- while dark secrets from the past resurface. Meanwhile, Michael finds himself in hot water with the feds, Kirby and Anders consider their loyalties, and Jeff is betrayed by someone close to him.

Fallon announces her intention to divest herself of the Atlantix and let Blake fend for himself, but he offers to join forces with her as full partners. Anders is anxious to get back to work after his heart attack, but ultimately joins Sam at the hotel instead. Jeff manipulates Adam into a fight in front of witnesses. He and Dominique stage a crime scene with Jeff's blood and Adam's cufflink to make it look like Adam murdered Jeff, who leaves the country. Dominique, however, removes the cufflink and calls Blake to confirm that his payments to her will resume now that Jeff is out of the way. Fallon learns that Blake and Cristal's separation is only a ruse, and realizes that they are framing Michael for Blake's crimes. She warns Michael, but Blake is one step ahead and Michael is arrested. Adam arranges for divers to find the body of Trixie Tate, a childhood friend of Fallon's who died accidentally at the Manor and whose body was placed in the lake by Anders. However, they also find a second body. Liam, hit over the head by Adam, falls face down into the pool.[2]

Fallon: You know, I was actually really looking forward to having you as a step-mom. And if the next one is also named Cristal, then I might have to throw myself down a flight of stairs.

Fallon: And God help me, but has he ever touched you in a not-so-friendly, Big Little Lies sort of way?

Fallon: You make me look like a liar, and worse, an abuser sympathizer. And my company, my entire brand, is specifically about giving a woman a voice after they've been silenced. And here I am, the daughter of a man who's trying to silence them.

Fallon: Liam. Marry me again, for real this time.
Liam: Is that a question?
Fallon: Is that a yes?
Liam: No. It's a hell yes. 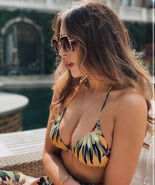