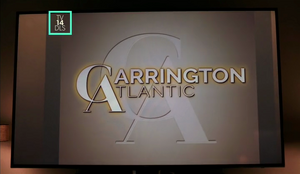 The five grandchildren of Tom Carrington once battled for the ownership of the company, which was was eventually sold, and became a subsidiary company of Van Kirk Industries. It was owned by the Van Kirk family for years, before Blake Carrington acquired it once more. 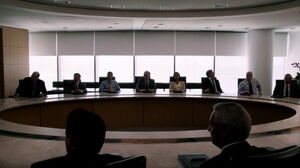 Carrington Atlantic, often abbreviated as CA, was founded by Thomas Carrington's father. The company quickly became a multi-billion dollar conglomerate. When Thomas' father was retired, he passed the company onto Thomas. Subsequently, when Thomas was ready to retire he handed the company to his son, Blake Carrington. Blake was the Chairman of the Board and former Chief Executive Officer of Carrington Atlantic. He was a ruthless and manipulative man in both business and family matters

As the company grew and expanded into more ventures, CA became so well known that the average citizen used something to do with CA daily without even knowing it. One year, Blake's son Steven staged an environmental protest against CA that cost the company millions of dollars.

Celia Machado was hired at the company sometime after this, and worked her way up from the bottom ranks. Celia was appointed the COO of the company, a position that Blake's daughter, Fallon Carrington, had been vying for years. To get revenge on her father, Fallon founded a company called Morell Green Energy Corporation.

CA faced legal and PR issues when an explosion at one of their assets, Windbriar Energy, killed a worker.

Blake, through Laura Van Kirk, struck a deal with the Moldavian government to secure oil for Carrington Atlantic. Laura tells him her plan to fire CA CEO Dustin in the morning so Colby’s blackmail plot against him won’t be an issue. Laura closed her deal with Moldavia early so she can rush the deal with Blake and secure him CA. ("She Cancelled...") Now back as CEO of Carrington Atlantic, Blake must handle an issue with the Moldavian King. He is forced to leave the country and fly to Moldavia per the request of the Van Kirk family. That night at the airport, while trying to leave Moldavia, Blake and Anders experienced difficulty with the government. They were kidnapped by the King. The pilot managed to escape and inform the Carrington family of the incident. ("You Make Being a Priest Sound Like Something Bad")

Blake and his right-hand, Joseph Anders, are imprisoned by the King for trying to "smuggle" oil out of Moldavia and to the states. The captains of the oil tankers won’t negotiate with the Moldavian government without the okay from Blake. The tankers aren’t leaving Moldavian waters, so the King asked Blake to call the captains and order them to turn around and return the oil. Blake refused to comply with the King's demands. Blake believed that the moment he signed over the oil the King would kill them. As long as they control the tankers they’re fine, as the King wasn't going to risk an international incident by shooting at the tankers. Blake and Anders are later rescued. Blake was able to hire local escorts in armed gunboats to escort the tankers back to Georgia. Adam thought the whole reason Blake was in this mess was that he couldn’t negotiate for the tankers. Blake clarified that he had the tankers the whole time, he just didn’t want to tell anyone. He didn't want to trade 150 million gallons of oil, which is worth $500 million, for their freedom. After the crisis, Blake appointed Adam is his right-hand man at CA. ("Robin Hood Rescues")

A few weeks later, the tankers are at a refinery, and Blake planned to host a press conference to announce he’s back at the helm of CA. Anders interrupted with bad news - someone leaked to the press that Blake stole oil from Moldavia and now the department of energy has launched an investigation into misconduct. Blake claimed the investigation is insane, as it wasn't his fault Laura Van Kirk set him up. Adam agreed that just because the King decided to nationalize oil doesn’t mean they can take what CA already paid for. Until the energy department agreed with the Carrington’s, all CA assets were frozen. Blake decided to turn to his friends in high places to squash the investigation.

His contact was reluctant at first, especially after someone threw a smoke canister with "Moldavia" written on it into her window. However, Blake was able to pressure the contact into doing what he wanted. CA would be back in business and the tanker released from the refinery just in time for the press conference. Blake delivered his press conference about CA being back in the family. The reporter’s phones chimed and the asked about the refinery explosion and how the loss of $500 million will affect CA. Adam pulled Blake away to tell him that the Moldavian oil was tainted and caused an explosion at the refinery. There were no casualties but it will be a nightmare financially and PR-wise. The press is going to be out for blood. Blake tells everyone the press conference is over and there will be no more questions. Unbeknownst to Blake, Adam bribed the captain to add a toxin to the oil. Blake believes that the Moldavians are out to get him. ("My Hangover's Arrived")