watch 01:47
Wiki Targeted (Entertainment)
Do you like this video?
Play Sound

I Hardly Recognized You
Blake Alexander Carrington is the male lead in the television series, Dynasty on The CW. He is portrayed by Grant Show.

An oil tycoon, ruthless billionaire, and mastermind behind Carrington Atlantic, he is the father of Fallon Carrington, Steven Carrington and Adam. He is currently married to Cristal Jennings following his failed marriages with Alexis Morell and Celia Machado.

Blake was the Chairman of the Board and former Chief Executive Officer of Carrington Atlantic. He is a ruthless and manipulative man in both business and family matters, who doesn't often appreciate his children like they wish he would. He often plays mind games on his acquaintances to try and catch them in a lie.

A business tycoon and mastermind, Blake's first love is his business. He will do anything to protect his companies and family name, even if it means partaking in illegal activity. He often uses his influence and position of power to perpetuate his interests. Blake is ruthless in business, and even more ruthless in his personal life. After the kidnapping of his first-born son, Adam, Blake hardened and stopped caring as deeply. While it is clear he cares for his family, his love can be dangerous as it drove him to cover up the death of Fallon's childhood friend. When Blake claims someone as a member of his family, they are protected and given anything they could ever desire. The first woman he loved after his divorce from Alexis was Celia Machado, under the alias of Cristal Flores.

After Cristal's death, Blake became apathetic and hedonistic. He proclaimed "Blake time" in which he was hell-bent on spending all of his money. His selfish nature escalated until reality hit at the return of his ex-wife. Blake went through many personal hardships, including the false return of his son, the real return of Adam Carrington, his relationship with Cristal Jennings, and the loss of their unborn child after Cristal's assassination attempt. Believing to have caught the culprit of Cristal's attack, he beat Nathan Macintosh to death and enlisted Joseph Anders' help in throwing the body in the lake. Since then, Blake has paranoid and took many lengths to ensure that no one could link him to Nathan’s murder.

Cristal is Blake's new wife and after five months of dating, they decided to tie the knot in "I Hardly Recognized You". Blake displays a caring attitude towards her and concerned about her, treating her very dearly. He loves everything about her but despite their happy relationship, the many secrets she has kept from him strain their relationship repetitively. Like other members of his family, he's not unwilling to lie to her. He was soon turned to a widower after Celia's murder, which launched him into a downward spiral.

Cristal Jennings entered Blake and the Carrington's following the death of Celia Machado, Blake's first wife whom Cristal was close with before Celia moving to America. Cristal helped Blake cope and comes to terms with Celia's death and process the part of Celia's life she kept hidden. Through this, they formed a bond with one another that soon turned romantic. They were quickly engaged and he helped her assimilate to her new lifestyle. They were married after Blake was arrested for murder. They married quickly to ensure that she would not be subpoenaed to testify against him. Cristal is often the only person pressuring Blake to be the best version of himself and to stay out of criminal activity. However, Cristal's complicated relationship with Blake's ex-wife Alexis often seeps into Cristal's relationship with Blake. The majority of their fights are either over suspicious business deals by Blake or Alexis's involvement in their lives. Their relationship has slowly become more distant, leaving both of them to have affairs.

She is the fiery daughter of Blake. Fallon seeks to gain his approval and take control of their family company, but Blake instead gives the responsibility over to Cristal, his new wife, causing the two to go into very bad terms. While he loves her, Blake is not afraid to discipline and scold her, at one point even banishing her from the manor when one of Fallon's "pranks", goes too far. At the end of season one, Fallon has the Board of Directors of Carrington Atlantic vote her father out and her in as CEO of the company.

He is the "liberal" son of Blake. After he plans to frack a burial graveyard that causes a lot more money, Steven left the manor to pursue his work. When he returned, Steven and his sister, Fallon, met Cristal, who becomes their new stepmother. On various occasions, Steven and Blake have clashed due to Blake's manipulative tendencies and lies. Despite their frequent arguments, they love one another. 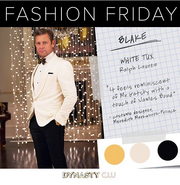 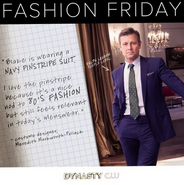 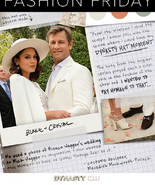 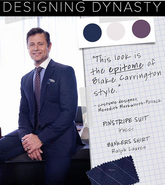 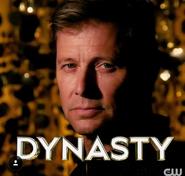 Retrieved from "https://dynastytv.fandom.com/wiki/Blake_Carrington?oldid=34510"
Community content is available under CC-BY-SA unless otherwise noted.