View source
watch 02:56
Doctor Strange in The Multiverse o Madness - The Loop
Do you like this video?
Play Sound

The relationship between Alexis Carrington and Jeff Colby, commonly referred to as "Jalexis" among fans, is a romantic, professional, and formerly platonic marriage.

Jeff, presumably, first met Alexis when attempting to take her daughter, Fallon Carrington, to their high school prom. He later discovered that Alexis was his ex-aunt in law.[3]

In a surprising turn of events, they later get married in a platonic business arrangement during Blake Carrington's trial proceedings.[4] However, their relationship eventually turned romantic.[5]. But when Jeff revealed he wants children, Alexis decided its time to end the marriage. They got divorced later on. [6]

Alexis tries to get Jeff to pull himself together and reconcile with Monica. As they discuss Blake's longstanding grudge against the Colbys, Alexis tells Jeff that he is actually a Carrington.[7]

Jeff and Monica go to their grandmother, who confirms that she had an affair with Thomas Carrington, and that their mother Millie is his daughter. Alexis informs Jeff and Monica that as Thomas' grandchildren, they are entitled to a portion of his shares in Carrington Atlantic.[8]

As Fallon is named Carrington Atlantic's CEO in Blake's place, Jeff and Monica reveal their Carrington heritage and declare their intention to force a sale of the company.[9][10]

Alexis' son, Adam, relinquishes his office to Jeff, but secretly pours a chemical into Jeff's new paint.[11] Jeff comes to meet a recently burned Alexis and tells her that he is taking her to his home for proper treatment. Alexis agrees but Adam blackmails her into declining the offer. [12]

Jeff is behaving erratically thanks to Adam's toxic paint, and collapses in his office.[13]

Jeff figures out that Adam poisoned him, and enlists Dominique to help destroy Blake and Adam.[14][10]

Alexis returns to testify against Blake and reveals that she has married Jeff.[15] Alexis testifies that she saw Blake murder Mack. Dominique is especially upset over Jeff's marriage, and confronts Alexis. Later, Dominique takes a public tumble down the courthouse stairs and makes it look like Alexis pushed her. Alexis reaffirms her commitment to help Jeff destroy Blake, revealing the reason for their marriage.[16]

Alexis convinces Adam to confess to poisoning Jeff on camera as a means for Adam to ingratiate himself to Jeff. Blake decides he wants Carrington Atlantic back just as Jeff and Alexis use blackmail to force a sale of the company in their favor.[18] Blake and Anders learn that Jeff and Alexis are trying to acquire Carrington Atlantic. Blake enlists Dominique to help him against Jeff and Alexis, and her price is moving into the Manor. Jeff initiates the purchase of a pharmaceutical company working on a cure for his condition, but Blake buys it out from under him as a bargaining chip to get Carrington Atlantic.[19]

Blake manipulates Adam into helping him against Jeff and Alexis, but Adam double crosses his father, guaranteeing that Jeff will secure control of Carrington Atlantic.[20]

Adam is reinstated as a doctor. Alexis coerces him into helping an ailing Jeff by procuring experimental drugs not yet approved for Jeff's condition. Jeff refuses any help from Adam, so Alexis administers the drugs without Jeff knowing. He later collapses after consuming alcohol, due to him having taken the drug unknowingly.[21]

Adam and Alexis scheme to steal a donor liver for Jeff, but they fail. Adam decides to donate a portion of his own liver to Jeff even though he may not survive the surgery due to previously donating. Elsewhere, Laura Van Kirk visits Blake and offers to block the sale of Carrington Atlantic to Jeff in favor of Blake.[22]

Now in good health, Jeff realizes that his marriage to Alexis only made sense when he thought he was dying.[23]

Alexis later finds Jeff in bed with his old friend, Mia, and he asks for a divorce. Alexis conspires to make Jeff think Mia is a prostitute, but he sees through the ruse. Alexis confesses her feelings for Jeff, and they have sex, thus proving that their marriage is more than platonic.[24][10] 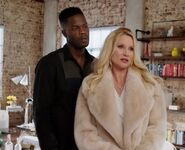