Affairs of State and Affairs of the Heart is the twenty-first episode of the fourth season and the eighty fifth episode overall of the drama television series, Dynasty on The CW. It aired on September 24th, 2021.

ALL'S WELL THAT ENDS WELL - Blake considers dropping out of the senatorial race and Culhane is devasted by what this would mean to the schools. Kirby offers to help Culhane and Cristal has other plans for Blake. Alexis confronts Dominique about her secret and proposes a deal. Fallon and Liam get away for a weekend together but things don't end up as either one thought they would. Jeff continues behaving erratically. Adam calls in a favor from Sam.

Colin: In your defense, he was the one who asked for time away.
Fallon: I don't think I can Ross and Rachel my way out of this one.

Fallon: This is not how I imagined using blindfolds this weekend. 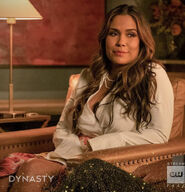 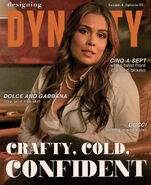