A Real Instinct for the Jugular

A Real Instinct for the Jugular is the eighth episode of the second season and the thirtieth episode overall of the drama television series, Dynasty on The CW. It aired on December 7, 2018.

OLD HABITS DIE HARD – Fallon recruits her mother's help with wedding planning, only to realize that Alexis may have ulterior motives. Desperately missing Steven, Sam develops a complicated relationship with a member of the Carrington staff. Culhane discovers his dark side as he ventures into a new business partnership.

Confronted about Little Blake, Alexis tells Sam that the baby is Hank's child, and Sam agrees to keep the secret. Fallon seeks Alexis's help with her wedding plans, and Alexis hits her socialite friend Mimi with her car to free up Fallon's chosen venue. However, Fallon decides to get married at Carrington Manor. Michael agrees to do one last job smuggling artifacts for Ada, and talks his way out of a dangerous situation. She gives him all of her blackmail material on Fallon and a $5 million bonus, but asks him to keep working with her. Missing Steven, Sam is tempted when Little Blake's new "manny", Manuel, comes on to him. Blake buys a soccer team for Cristal. Sam sees a pregnant Claudia in his wedding photos, and Alexis makes the connection that she is Little Blake's mother. Sam learns that Claudia has escaped the institution, and wonders if she killed his aunt Cristal and set the fire. Claudia rages over her missing child, and Little Blake disappears from the nursery.[2]

Fallon: I'm Fallon Carrington. I run this town. I make the rules and I always win, sometimes gracefully.
Mimi: Your daughter is quite an adversary, a real instinct for the jugular. You should have warned me.
Alexis: She's a modern woman. She knows what she wants and how to get it.
Fallon: Well, finish your tiny sandwiches, Mimi. This bitch has moves to make. 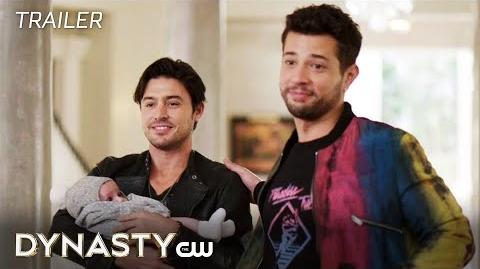 Dynasty A Real Instinct For The Jugular Promo