A Little Father-Daughter Chat is the sixth episode of the fourth season and the seventieth episode overall of the drama television series, Dynasty on The CW. It aired on June 11, 2021.

WHO'S THE BOSS - With Blake and Fallon's new agreement in place, Fallon sets out to make sure everyone knows who's the boss. Adam heads back to the hospital to undo the damage done by Fallon as competition sparks between the siblings as to who has the bigger job. Sam complains to Culhane about his relationship and Culhane admits he's uncomfortable with his new status. Cristal and Blake make headway towards reconciling but Blake realizes it's going to take more than a happy hour to win her back. Liam experiences writer's block. With Kirby feeling Adam has grown distant, she shows up at the hospital unannounced and is met with quite a surprise.

At the Carrington Manor, Fallon is rummaging through her Gucci collection trying to find something to wear, when Liam wakes up. She claims she has nothing to wear but he tells her what she has on is great. Today is Blake’s first day at Fallon Unlimited she she wants to look “bossy.”

Blake is in his room at La Mirage multitasking getting ready and speaking to Anders. He tells Anders that while the priest is back to preaching, he will be meeting Cristal later that evening for drinks.

Kirby and Adam are getting ready to head to work as well. Adam,the doctor in the room, reminds Kirby that her stab wound still isn’t completely healed so she should take it easy. Kirby isn’t too worried, however, and kisses him goodbye. Adam on the other hand is worried because Fallon still hasn’t decided who she is awarding the grant at the hospital to since it can’t be all five participants like originally promised.

Sam calls Culhane over to the hotel to vent about his long-distance relationship with Ryan. Sam doesn’t know how much longer he can be apart from Ryan, as he wants him in Atlanta so he can figure out if their relationship is going to take off. Switching gears to Culhane, Sam asks him why he’s still in Atlanta when his new riches can afford him just about anywhere in the world. He gives him the presidential suite, on the house, for a few days so he pamper himself a bit.

At Fallon Unlimited, Fallon is giving Blake the rundown on the company while showing him to her office which he thinks is his. When he finds out it isn’t his list of demands begins. While they wait for the team to get back, Fallon asks him to fill her in on his cost-cutting ideas but Blake tells her to “let Blake be Blake” and trust him. They bicker and Fallon gets overwhelmed. Before she can say something she regrets she tells him to leave her office and begins the counting exercise that Liam suggested she do to calm down.

Cristal is at the bar waiting for Blake, who orders them drinks. He tells her he’s employed and asks to take her to dinner, to which she obliges. They start reminiscing on life at the manor when Blake tries to steal a sneaky kiss, Cristal blocks it and hands him his drink instead.

Sam and Ryan are at dinner and he tells Sam about his acceptance to Western Atlanta. Sam is ecstatic, but Ryan is worried about how he’d be able to afford tuition and a move to Atlanta from New Orleans. Anders runs into Culhane at Oasis in the hotel, and he congratulates him on selling Atlantix. Culhane shows off some of the finer things he’s thinking of purchasing, before pulling up an Aston Martin driven by James Bond. Anders remarks that he should be more careful with his money because he has a few things to learn about being rich. Just then, he pulls a loose string off of Culhane’s suit and tells him it’s fake cashmere.

Blake begins his budget-cutting strategy which includes the firing of the entire Fallon Unlimited staff. Fallon walks in and asks what he did and why people are crying. She sends him to her office. In her office, she lashes out at him. It’s not Carrington Atlantic, this is her company. She wants him to hire everyone back and come up with an actual plan.

Meanwhile, Culhane is eating breakfast as Sam walks up and asks him how his stay is going. They start talking about Ryan, and Sam is considering breaking up with him because he’s not sure it can keep working the way it’s going. They both wonder if Ryan is lying about Western Atlanta not having scholarships left.

Culhane walks back into the hotel with a few bags and Sam teases him about his purchases. Ryan appears and Sam begins grilling him with questions about his day. When he walks away, Culhane asks what Sam’s deal is, to which Sam responds that Ryan had been offered a full scholarship to Western Atlanta and didn’t say anything about it.

Blake has hired the whole staff back and has a meeting with a mysterious man who he lets know that Fallon can’t know anything about their little meeting.

At the hospital, Kirby drops in on Adam when she overhears a conversation about him running for chief, and he’s told to drop out of the running because he doesn’t have a chance. Dr. Bailey lets him know that once she highlights this fact and his other “shortcomings” she will take over as chief and it will give her the opportunity to reevaluate the staff. When she walks away, Kirby is heated and reveals she has an idea.

At dinner, Blake is talking about himself and his work, but Cristal thinks that he should listen to Fallon because he needs to learn that taking other peoples feelings into consideration isn’t a sign of weakness. She gives him a kiss on the cheek and bids him a goodnight. Before she leaves, she wants him to promise he will try harder with Fallon.

Fallon walks into Blake’s study only to find Liam indulging in Blake’s whiskey collection. She asks about his writing and how it’s going, but he’s uninspired. She tells him to write about something meaningful to him because it will be meaningful for others, and suddenly it lights a fire inside of him.

Ryan surprises Sam with a date, and he wants to get candid about their relationship and where it is going when Sam cuts to the chase, he knows Ryan was offered a scholarship to Western Atlanta. Ryan looks absolutely shocked and asks how he knows that. Sam comes clean, telling him he is the reason he got the scholarship because he donated money to the school in exchange. Ryan is upset and walks out and Sam knows he blew it.

Meanwhile, Kirby and Adam have snuck into Dr. Bailey’s office to mess with her presentation that is due in the morning. Kirby adds a not so safe for work video to it to ensure she doesn’t get the position.

Back at La Mirage Ryan is in the lobby when he runs into Culhane who asks about Sam and what he did. Like the good friend he is, he tries to convince Ryan that Sam was just trying to help, but Ryan doesn’t want to be a kept man, or lied to for that matter.

Liam shows up to Fallon’s office with a sweet treat to help her get through her day with Blake there. He tells her he returned the advancement to the book publisher because he wants to get back into investigative journalism instead. Fallon gets a notification that Blake is searching for another job which quickly makes her scramble.

Adam is waiting outside for Dr. Bailey who looks furious. She tells him she could get him fired for what he did, but Adam says she has no proof that he did anything wrong.

Sam is surprised to see Ryan still at the hotel, and they both need to get some things off their chests. Sam apologizes to Ryan and says that if he’d rather stay in New Orleans because it’s in his means, then he will get an apartment and make things work. However, Ryan tells him that he’s going to Western Atlanta since a little birdie named Culhane offered him a good loan. They’ve both realized that they are ready to commit to their relationship.

Blake is in a yoga class which Fallon interrupts. She goes off on him, telling him that he betrays and ignores everyone else and puts his own needs first. Blake starts yelling at her, and the class has stopped, everyone now looking at the both of them. Before Fallon walks out she says he did show her one good way to cut costs, and fires him.

Blake brings Cristal flowers and thanks her for opening his eyes. He’s surprised she put up with him as long as she did. Cristal says this is all she has ever wanted to hear from him, and they seal it with a kiss.

Sam thanks Culhane for lending Ryan the money when suddenly the Aston Martin pulls up. Sam thought the bidding got too high and Culhane says it did, but he emailed the guy that won and made him an offer. His mantra is for every good thing he does, he’s going to reward himself. He unzips his jacket and reveals a true James Bond suit, hopping in the car and driving away.

Fallon is going over paperwork when Blake walks in, apologizing. He says he wants to stay to help and make her company greater, as much as he thought she needed him, he needs her just as much.

Cristal is on her way to her room when she faints. Luckily Anders is there to help her, but she brushes him off saying she’s just been feeling nauseous lately. She doesn’t want him to tell Blake because he’ll worry and there is nothing to worry about.

Liam: Isn't that illegal?
Fallon: I don't know, but he should be arrested.
Liam: I meant you reading employee emails.
Fallon: Oh, Liam, it's 2021, don't be so naïve.

Fallon: To be continued. Right now, I have to find a headhunter of my own and order him to shoot Blake.

Fallon: You know what? You are right. You did show me one way to cut deadweight. I hope you have a great headhunter, because you are fired! (throws the gong mallet into the gong) 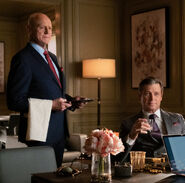 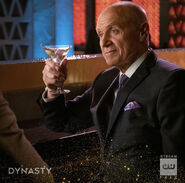 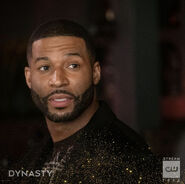 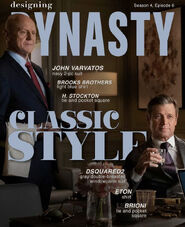